Microsoft releases PowerShell on 14 November 2006 for commercial use. It is built on the .Net framework and supports object-oriented programming methodology.

Earlier in each release of window operation system, there is one Command-line interpret (CLI) like MSDOS which is used for also basic operations but it not capable to perform GUI operation like if you need to create a windows application form that is not possible using MSDOS so Microsoft has introduced PowerShell which support command line task as well as GUI operations.

I give you one example so that you can understand suppose you want to remove one windows 10 app from your production environment and being a developer you do not have access to production. So you write a PowerShell script and send the same to system administrators who generally have access to upper environments they will execute the script so I am team everyone can use the PowerShell for configuration change and to automate the task.

There are many factors, which you can consider where PowerShell is helpful –

How to Launch PowerShell 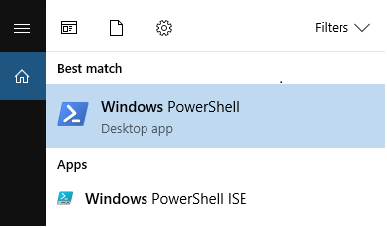 How to identify the PowerShell script

All files, which have .ps1 extension, are called PowerShell script and it has been executed on the PowerShell command-line interface.

How to execute PowerShell script

There are two ways to execute the PowerShell script.

Go to that path in PowerShell command line where you script saved then press the first character of the file name and press tab then enter to execute the script.

Microsoft released several major and minor versions of PowerShell and the latest PowerShell version at the time I am writing is article is PowerShell 7. In each release, they have increased the no. of cmdlets to provide more flexibility to PowerShell users.

How to check PowerShell version

Open PowerShell command-line editor and run below commands to check which version of PowerShell is installed on your machine.

So on my machine PowerShell version, 5.1 is installed.

This is a very simple right. You do not need to do much to learn PowerShell just you need basic programming skills so that you can write the complex script to perform different operations.

Powershell provides a bunch of commands that are called cmdlets. Using these cmdlet you can perform work on different tasks. In upcoming tutorials, we understand PowerShell cmdlet that actually you need to learn to works on PowerShell.

I hope now you have basic PowerShell understand that will help you to understand other lessons as well.